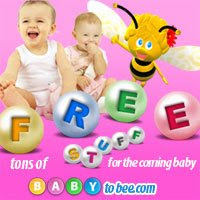 I signed up for a freebie website called BabyToBee thinking I would find another great source for free baby items, but instead I found a pain in my a**! I submitted the sign up form on Friday only to receiving calls on Sunday from +31 43154870 on my cellphone. I didn't answer because I thought it was an international call/scam! Well the number called my phone 5 times on Sunday alone SOOOO I decided to google the number. I found a number of people complaining to have received numerous calls from this number as well. So who does the number belong to? Hmm...what a shocker...Baby To Bee! I opted for emails from this company NOT calls up to 5 times a day. They finally stopped when I sent them an email asking 'Why the hell they are calling me 5 times a day?' (I asked nicely. Haha) Anyway, after my email I have not received a call from them. Thank GOD!
So the morale of this story is to avoid signing up with companies that require your phone number! I learned that it can be a real pain! I have been told by other people that they did not encounter this problem with Baby To Bee, so I guess I was the lucky one. I regret signing up with them because quite honestly they don't have any great freebies listed. ::sigh:: Lesson learned!

My experience with them wasn't the same. I did give them my home number and when they called I was on the phone for about 10 minutes answering different questions and that was it. They never called me again. I don't remember what number it came from though, it was a while ago when my 1 year old was born.