After 3 whole months of waiting, my husband & dad are finally on their way home! 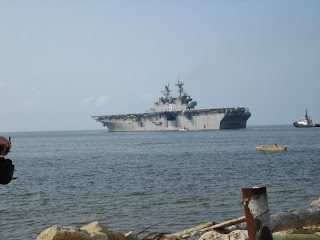 Here's an article about their ship:

Makin Island is scheduled to be formally commissioned Oct. 24 in a ceremony in San Diego and witnessed by the friends and family of the ship's 1,100 plankowners.

Makin Island earned commission (special) status June 26, after its successful completion of Light-Off Assessment, Anti-Terrorism Force Protection Certification and Crew Certification. These are the three major inspections the crew had to pass in order to get underway.

"Well done to you all," said Makin Island Commanding Officer, Capt. Bob Kopas to the crew. "It's the performance of the crew that got us where we are. This is just the beginning of a long road for us in commissioned status."

The next two months will take Makin Island on a transit around South America, during which the crew will continue training, obtaining underway certifications and preparing for its arrival in San Diego....(continued here)

This week's Wordful Wednesday hosted by Angie at:

Thank you so much. I'm so excited! Thank you for stopping by The Frugalicious Mommy.

Fantastic news! You must be so happy!

I am, Michele. Thank you for stopping by The Frugalicious Mommy.