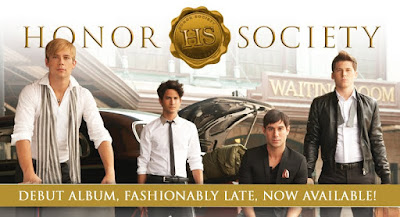 We're sure that this will be a giveaway favorite among parents with tweens & teens! We have a fantastic prize pack that not only includes a pair of concert tickets but also a pair of Meet & Greet passes...Woohoooooo! (This is a quick giveaway so enter soon!)

So who is Honor Society?
Honor Society has been named a breakout band to watch by Rolling Stone and a Buzzworthy artist by MTV. They also earned an opening spot on one of the best-selling tours of the summer as they joined the and Jordin Sparks on the North American leg of the World Tour 2009. Honor Society's explosive growth is due in large part to the commitment of an ever growing base of intensely loyal fans that the band communicated with using both MySpace and YouTube. Their infectious sound, skilled musicianship, high energy live shows and sense of style has led to nearly 4 million plays of their music on their MySpace music profile. Honor Society's debut album, Fashionably Late, is due for release on September 15, 2009. To learn more about Honor Society visit: http://honorsocietymusic.com

Win!!!!!!!!
Crowd Surf has offered to give (1) lucky Frugalicious Mommy reader a pair of tickets to their upcoming concert & a pair of meet and greet passes!!!

To Enter:
Leave us a comment with the Honor Society show they would like to attend (City, ST and date).
https://tickets.honorsocietymusic.com/

I am a follower of your blog!

I would like to go to the show on April 17th in Pittsburgh, PA!

I'd like to attend the one in Washington D.C.!

I'm a subscriber, via Google Reader.

I grabbed your button. #1

I grabbed your button. #2

I would like to og to the show on 4/24/10 at the nokia theater in NYC. I have to girls at home that love honor society!

i am following your blog!

i tweeted about the contest

I am also following you on twitter for an extra entry!

I am a fan on facebook now for an extra entry!

I'd like to go to April 16 Chicago IL House of Blues!

I would LOVE to go to the show in Scottsdale, Arizona on 3/31

i am following your blog via google friend connect

i subscribed to your blog via email

i tweeted about this giveaway here: http://twitter.com/smashley_ashley/status/10459451199

i added your button on my three blogs:
http://centerme.blogspot.com

i tweeted about your giveaway today http://twitter.com/smashley_ashley/status/10478915174

i tweeted about the giveaway today http://twitter.com/smashley_ashley/status/10528186335