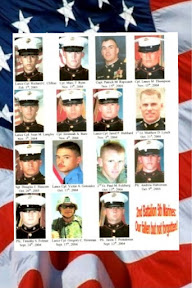 As this weekend is coming to an end, I began to realize that many people are forgetting the real purpose/meaning of Memorial Day. Most people associate Memorial Day with three day weekends filled with barbeques and parties. However, Memorial Day is a day of remembrance to honor those who paid the ultimate price for our freedom!!!

So put down the beach towels, the beer, the grilling gear and let's take the time to pay our respects to the fallen. There are a number of events going on tomorrow just google Memorial Day events (and your City) and you'll be sure to find a few! Here is a list of things that will be going on in the San Diego area:

Chula Vista: A Veterans Memorial will be dedicated at 11 a.m. Monday at Mater Dei Catholic High School. 1615 Mater Dei Drive. The dedication honors those Marian/Mater Dei Catholic Alumni who have served their community and country and in memory of two alum who where killed in action in Vietnam. (619) 423-2121, ext. 117.

Del Mar: The Del Mar Community Memorial Day Service will be held at 11 a.m. Monday. Captain Brian C. Schexnayder, USMC, will be the guest speaker. At the end of the service, deceased military members will be remembered during the Memorial Roll Call, which concludes with a performance of taps. St. Peter’s Episcopal Church, 334 14th St., Del Mar. (858) 279-5458.

San Diego: San Diego Veterans for Peace, Hugh Thompson Memorial Chapter, will host an Arlington West Memorial on Monday at the USS Midway Museum lawn, at Broadway and Harbor Drive. Veterans will participate from 8 a.m. to dusk. The public is invited to assist with the placement of religious symbols and candles. Names of the fallen in the Iraq and Afghanistan wars will be read. (858) 342-1964.

San Diego: An introduction by Rod Melendez will begin a ceremony that includes an invocation by Chaplain Darcy Povich, numerous speakers and the playing of taps from 7:30 to 10 a.m. Monday. Veterans Memorial, 2115 Park Blvd. (619) 239-2300.

I hope you had a wonderful holiday weekend!