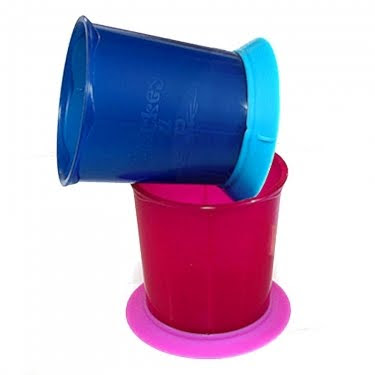 Yeah, that's usually what you hear in our house, at the restaurant, or anywhere else we take the kids. Even I am notorious for knocking a drink over, which can sometimes be bad IF I'm by my electronics! Phewww those days are over! About a week ago I was sent one pink Stickey Cup to review.
The Stickey Cup has been specially configured to securely mount to virtually any non-porous surface, with or without water; however, just a couple drops of water makes for a longer lasting, belief defying, stick. It doesn't use an adhesive that could harm surfaces or prevent portability, rather the Stickey Cup uses a uniquely designed rubber suction cup that is rock solid. The Stickey Cup cup holder is slightly tapered to allow for a multitude of container sizes, whether it be a cold beer during a weekend boat outing, or hot coffee on your desk every morning.

I first tried the Stickey Cup at my workstation:

I'm such a klutz, so I try to keep away from having any liquids close to my computer. During my first use of the Stickey Cup, I somehow managed to bump my coffee cup a several times (not purposely). However, the Stickey Cup stayed firmly in place and prevented any nasty spills!
Next test was to see how it would hold up with my kids!

I wasn't sure if the Stickey Cup would stick to my children's wood table, but it did! My son repeatedly bumped the holder over and over to see if he could knock over his cup...he failed. I then tried the holder with my youngest daughter's cup, but realized that it would be perfect for her snacks versus her spill-proof cup. Placing her snacks (like Cheerios) in the holder prevents her from dumping them or dropping them! Yaaay!

Win It:
The kind folks at stickeycup.com have offered to give (1) lucky Frugalicious Mommy reader a Stickey Cup Holder of their own.

Frugalicious Mommy Disclosure: I received one or more of the products mentioned above for free using Tomoson.com. Regardless, I only recommend products or services I use personally and believe will be good for my readers. I am disclosing this in accordance with the Federal Trade Commissions 16 CFR, Part 255 Guides Concerning the Use of Endorsements and Testimonials in Advertising. Tomoson Product review & giveaway Disclosure. Sponsored by Tomoson.com
Posted by Virginia at 12/10/2010 03:33:00 PM