About two years ago, my mother and I were attending my brother's bootcamp graduation. Over the course of these two years, Barry has been on the east coast attending school. Just recently he and his family relocated to San Diego to Barry's new duty station. So now it's official -- Barry has joined the fleet! No longer is he a student. Now he gets to actually experience the Navy.
We are so proud of him and all his accomplishments he has had in his naval career. Although it saddens us that he left for his first deployment yesterday, we know that it is something that must be done. Safe travels my brother. Love you and see you soon. 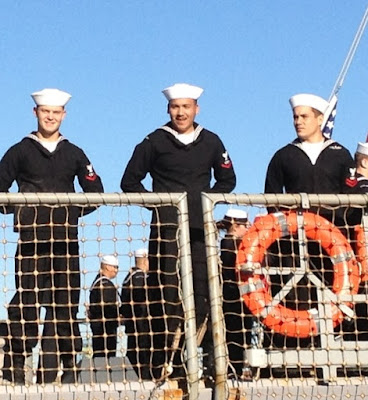 Above: Barry manning the rails.

Both San Diego-based warships will join the Lincoln and destroyer USS Momsen, which are scheduled to leave their home port of Everett, Wash. on Wednesday.

The Navy calls the deployments routine.

During its last deployment, the Sterett took fire during a clash with Somali pirates. On Feb. 22, the Sterett was shadowing the pirates when they fired a rocket-propelled grenade at the vessel. In response, Navy SEALS boarded a 58-foot sailboat on which a Marina del Rey couple, Jean and Scott Adams, and their friends, Phyllis Macay and Bob Riggle of Seattle, had been held.

All four had been fatally shot. Two pirates were killed and 15 captured.

The Adams' boat was seized by the pirates a couple days earlier off Oman.

Agree! :)
Thanks for stopping by.