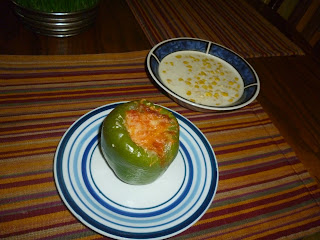 Recently I seen a program on TV about Quinoa. I did some research and found it has a lot of great benefits. Since my diet consists of mainly veggies I thought I'd try it to get some protein into my diet.
This weekend I made a pot of Quinoa and used it to make Cereal in the morning, Corn Chowder for lunch, and Stuffed Bell Pepper for dinner.

Here are some of the great benefits of Quinoa:


Protein - very rich in protein. Quinoa is a good source of protein for vegetarians and vegans because it contains all 9 essential amino acids.

Fiber - good source of fiber with 7 g per 100 g of seeds, which is much more than brown rice, but less than for the other grains.

B-Group Vitamins - rich source of G-group Vitamins with highest concentrations for Vitamin B6 and especially folate. It is also a good source of riboflavin, that helps maintain energy metabolism within muscle and brain cells.

Anti-inflammatory phytonutrients - good source of antioxidants including the polysaccharides, flavonoids like quercetin and kaempferol; and saponins. Quinoa also contains moderate amounts of the anti-inflammatory omega-3 fatty acid, alpha-linolenic acid (ALA).

Saturated Fat - has very low levels of saturated fats compared with other grains.

Gluten-Free - Quinoa is naturally gluten-free.  Quinoa flour can be used for baking cookies, breads and muffins that are gluten-free.

Simmer quinoa, potato, carrot and onion until tender (about 15 minutes). Add corn. Bring back to boil and simmer another 5 minutes. Add milk. Bring just to a boil. Season to taste.

Pre-heat oven to 325° F. Cook traditional quinoa following basic directions (add 1 cup quinoa to 1 1/2 cups boiling water, return to a boil, then lower heat to a simmer and cook until water is absorbed, about 15 minutes). Steam 4 large or 6 medium green peppers until soft but not limp. In a large skillet, saute the onion and mushrooms in butter. Add the diced tomatoes (reserve the juice). Add the crushed garlic and Mexican salsa. Cook over medium heat for 10 minutes. Add the sherry and simmer 10 more minutes. Fold in quinoa. Place peppers in baking dish and fill with quinoa mixture. This will take about half the mixture. Thin remainder with reserved juice and pour around peppers.

Sprinkle shredded mozzarella over peppers and bake in 325° F. oven for 30-35 minutes.